Sign In
Turn on suggestions
Auto-suggest helps you quickly narrow down your search results by suggesting possible matches as you type.
Showing results for
Search instead for
Did you mean:
Options
Highlighted
squiggly
Builder

I love this thread!

Lately I've been running a program on my laptop that's helping with COVID-19 research (https://foldingathome.org/ if anyone's interested) and when I set it to high, like I did today, it uses soooo much battery. I was using my laptop and it told me my battery was low, so I plugged the charger in. Ten minutes later it ran out anyway! I laughed because my first thought was "me too laptop, I also sometimes work too hard and fall asleep at awkward times"

My sister and I are playing a detective/mystery game we haven't played before and it's made us laugh a lot, just because of how incompetent the investigators are. I turned to her and said, 'We've played a lot of these kinds of games and I think these have to be the worst investigators we've ever seen' and she agreed. It's almost as if they are determined not to solve the cases. The whole plot has been full of blunders so far.

The juxtaposition between us trying to solve the cases and what the characters actually do is hilarious too.
The 'victim' turns up alive? Maybe the body was misidentified then. Nope, the investigators think the victim must have come back to life.
Since there was an autopsy report, the body must still be at the morgue. Can we go there and order some tests to find out some things? Nope, the game casually tells us the body has disappeared from the scene. I said to the screen, 'What? How? When? Why? Wasn't anyone staying with the body?' Apparently, there was a more than one hour window where the investigators left the body totally unattended. But no matter, because all this is immediately forgotten about and dropped as a potential line of investigation.
Let's go interrogate the first suspect we see, despite the fact that we haven't questioned a witness who we've established has already seen the body and may be able to tell us more about what happened. While we're at it, let's take another vulnerable witness to meet with a bunch of gangsters without any security present.
We go and question another suspect (known to be a serial killer) with absolutely zero safety measures in place. He attacks the investigators, steals a gun and escapes. Quick, let's jump into our car after him and send his description out to all the police departments in the area. Maybe we can use the resources at our disposal and set up a trap. Instead, the investigators just stand around chatting and quickly forget that there is an armed killer on the loose.

Maybe the game will provide some kind of explanation for the characters' actions later on but right now, it's funny and mildly infuriating at the same time. 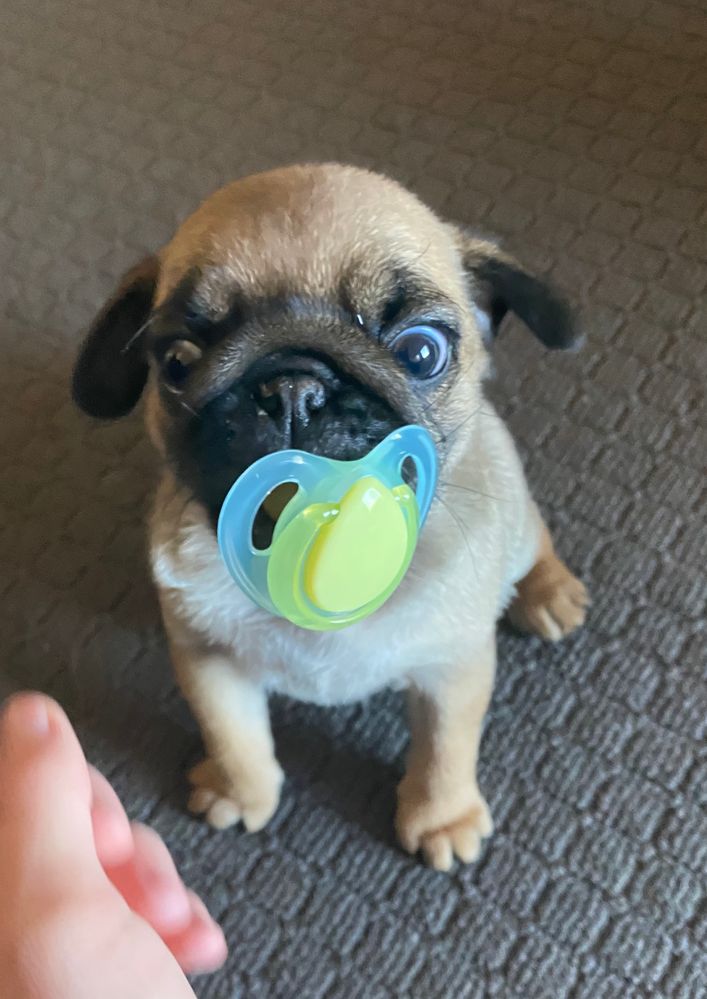 My mum got Macy a dummy and she’s been running around the house with it.. she’s crazy

Oh my goodness @Bananatime04 , seeing this has honestly made my afternoon! The look on Macy's little face is hilarious, and she makes the dummy look so massive!

Today, my ophthalmologist's office called to ask me to reschedule the appointment. My mum answered the phone and said, 'Where in the hospital are you?' thinking that it was my nephrologist's office calling. Then they said they weren't in a hospital and were the ophthalmology office. My mum said, 'Oh, I thought you were her nephrologist. She's just got so many problems, I get confused with them all.' Then later, my mum asked me if I had the referral for Mahmoud. I said, 'Who is Mahmoud?' She said, 'Your ophthalmologist'. It's funny because his name is not even close to that.

Something funny happened again today! My sister was having physio at our house when one of her teachers called to introduce himself as her previous teacher was going on leave. My mum talked to him, but every so often he would get interrupted by my sister letting out a scream from the physio touching and moving her legs in the background. So he would say something, and then pause for about ten seconds, then start talking again, then have to stop. My mum explained to him that she was doing physio and he said, 'That reminds me of when I used to have physio and it brought me to tears!' Then the physio said, 'Wonder what happened to him?'

@WheresMySquishy this thread is an awesome idea and I love it so much!!

I laughed because of a funny interaction I had with some online friends.
Reply
3 High Fives
Highlighted
Andrea-RO
Mod Squad

I laughed this morning when my housemates barged into my room this morning with coffee, demanding that I get out of bed and hang out on the balcony. They may or may not have had to pull me out by my feet

Check out our Weekly Wellbeing thread all about the things that interest us!

We're having a 'Let's Chat' discussion about Having Your Own Back! Come check it out here!