Sign In
Turn on suggestions
Auto-suggest helps you quickly narrow down your search results by suggesting possible matches as you type.
Showing results for
Search instead for
Did you mean:
Options
Highlighted
stonepixie
Post Mod

RUOK? Day: What did you do?

So the lovely @N1ghtW1ng posted way too early.

But putting that behind me, they made a great introduction into what RUOK? Day entails.

I've made a new thread, because, why not?

Anyway, I want to know what you guys did to encourage conversations and such seeing as this year it falls on World Suicide Prevention Day.

Also, what does RUOK? Day mean to you? Do you have any stories you would like to share? Also, do you have any traditions? What events did you get involved in?

Remember when posting to adhere to the community guidelines.

So I've already had a few conversations around RUOK day as I was at an event promoting youth wellbeing, in which I gave a speech. The picture of my cue cards is edited that way so as you guys can't see identifying infomation. Sorry, not sorry. 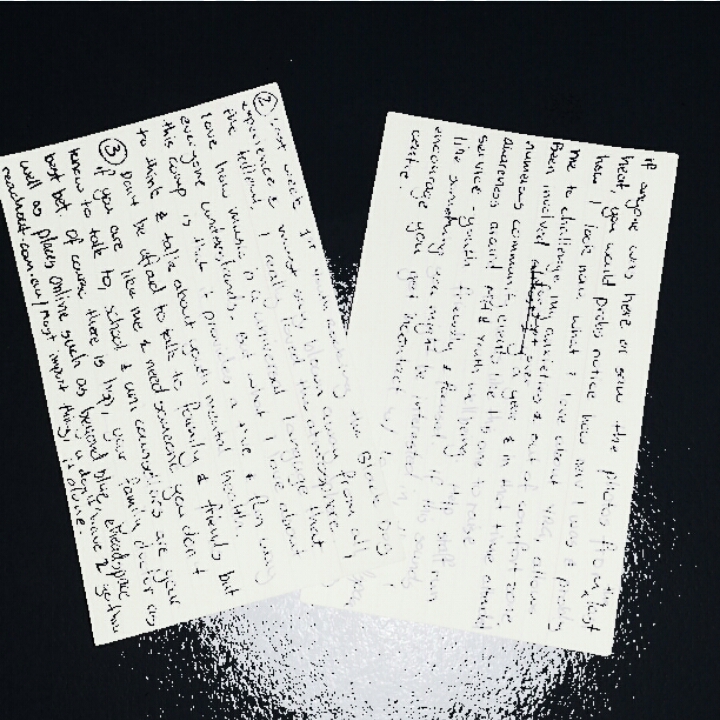 I also asked the audience to talk to someone they haven't spoken to in a while. All in the spirit of RUOK Day.

I will answer my other questions in the morning.

Hope you have an amazing day and have lots of conversations that matter.

My entire life can be described in one sentence: It didn't go as planned and that's okay. ツ
Reply
2 High Fives
Highlighted
Ben-RO
Uber contributor

I made a post on my personal Facebook page and basically said that I was always happy to chat to anyone either on Facebook or over a Coffee.

I also wrote one of these for the RUOK site

Back again and it is a funny looking morning. Hahaha.

What can I say? I slept in!

So, as with every other year, I baked cupcakes! Only I didn't get to decorate them. Boo! When I moved, I must have gotten rid of my icing gel pen. Oh Well!

So RUOK Day started in 2009 (?) but didn't really gain much traction until a few years ago. Most people just take the mickey out of the day and run around asking everyone RUOK and then laughing. I think there is still a fair way to go in terms of people understanding what the day really means. And I guess to me, the day is all about encouraging conversations with people you have lost contact with over the year to make sure they are still plotting along nicely and also to remind people that a simple conversation can save a life.

I have a story I would like to share. I think I have said it a few times here on RO but it relates to the day even though it never happened on RUOK day. But then again, that is what suicide prevention was all about.

A few years back, when I was still at uni, everytime I met with my proffessor, he would ask if there was anything he could help me with, being an honours student and all. But after a couple of months, he began asking me if everything was okay. My immediate thought, always was "yeah, why wouldn't it be?" But then one day towards the end of the year, when he asked, my thought was "actually no, I'm not okay." But of course, me being me never said that, but the thought was always there and then right at the beginning of the following year was when I started seeing professionals.

I haven't seen my professor in a while, only a couple of times after reaching out for help, but I've let him know how grateful I was for his relentless asking. It may have saved my life.

My entire life can be described in one sentence: It didn't go as planned and that's okay. ツ
Reply
3 High Fives
Highlighted
N1ghtW1ng
Post Mod

@stonepixie +1 for sleeping in. +3 for cupcakes, iced or not. +7 for the info. +infinity symbol for the story

It's great when there are authority figures (teachers, parents, professors, so on) in our lives who look out for students or kids or whatever.

For me, I went to school, wanted to sleep in (jealous of you stonepixie!) but made it home early, because thursday! YAY! Plus, I just had a vanilla slice... I think that's the correct word for it in english, but you can see a picture of it in the awesome thread @j95 started in the games section.
I've also just sent messages to most of my friends plus my family asking how they are. (No, I'm not late, because it's still the 10th, at least where I am). AND I've had two replies. One from here and my best and longest friend from Australia. I was planning on being 100% honest (saying that I've been having a bad week) but not with my longest friend, just because we haven't had a lot of contact recently. But with my other friend I am. Oh, I hope she doesn't mind that I said that though! So bad at talking to people.

Anyways, I hope everyone had a lovely day!

@stonepixie I didn't post way to early, I was making sure that everyone knew it was tomorrow!

I was planning on going to the shops to buy some of that stuff you can write with from the baking section but couldn't have bothered, which is why I 'slept in'. Still had to catch the bus at 8:20 though.

Chin up, the weekend is almost here!

Hope your convos with your friends will help you feel better.

My entire life can be described in one sentence: It didn't go as planned and that's okay. ツ
Reply
2 High Fives
Highlighted
N1ghtW1ng
Post Mod

@stonepixie using the link that @Ben-RO posted in the other thread, I'm writing a few notes. One to Jas, my exchange friend who has supported me and some other ones too.
Hopefully the weekend will be a good one!
Reply
1 High Five
Highlighted
Craycray17
Post Mod

I Was selected to help out at the conversation Cafe at Monash University yesterday, so I went around with my awesome tshirt and balloons taking orders, introducing people to the concept and delivering coffees to tables

it was my first time doing any sort of waitressing and it was tricky at first but I got the hang of it! It was a great day all up, and i got to chat with some people who were alone in the Cafe, and make some new friends

I'm a day late but my uni did some pretty cool stuff for R U OK day. There was so much free food (which I ate before taking a picture - it was too delicious

). There was someone dressed as a dancing monkey, foosball and a letter writing station. I got a wristband as well 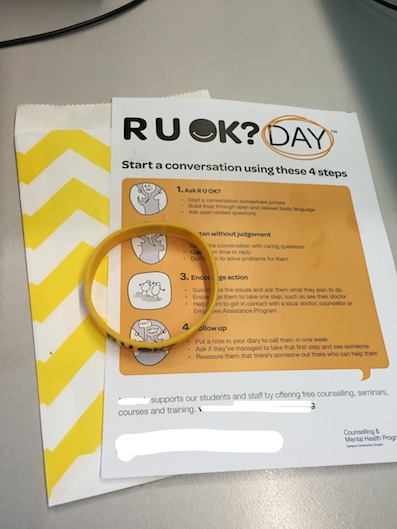 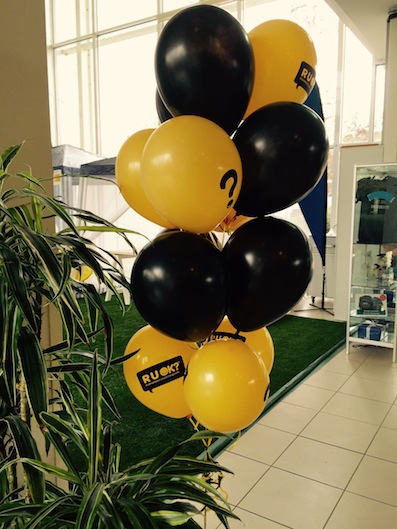 @lokifish that's so cool! I'm really disappointed in my school and the lack of awareness for these things it had! We had a day for breast cancer, a yearly talk about cyberbullying and that was basically it. (Something I'm gonna change! I hope.)
Reply
0 High Fives
Highlighted
Craycray17
Post Mod

@N1ghtW1ng maybe you should bring some mental health awareness to your school! Is there someone on the board yoy can suggest a day to?
we are what we repeatedly do - aristotle
Reply
1 High Five
High Five Lurking Days
Announcements