Sign In
Turn on suggestions
Auto-suggest helps you quickly narrow down your search results by suggesting possible matches as you type.
Showing results for
Search instead for
Did you mean:
Options
Highlighted

Ah geez i reckon everyone is going through a bit of tough time recently. I know for me I have been on a bit of a roller coaster lately. Music helps me in so many ways but lately it has helped me when I am really sad, I have actually been listening to sad music and allowing that as time to grieve. I find I can then just sit in my feelings and start to process them.

I don't suddenly feel happy but just a little lighter.

How does music help you through tough times?

Sometimes when I'm sad I'll listen to sad music and just wallow in my sadness, which in theory doesn't sound helpful but it's actually really comforting to know that other people go through hard times too and there's people out there who know your pain.

But sometimes it'll do the exact opposite for me too! Like listening to really upbeat, happy music to break me out of my funk and help me feel good. If it's a really pumped-up song it can even push me that one step further and get me to go for a run or some other exercise! 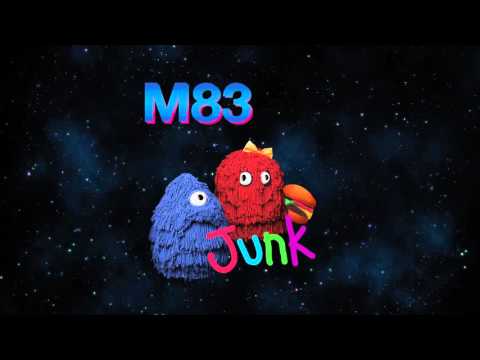 M83 - Laser Gun feat. Mai Lan (Audio)
youtube.com/watch?v=eISdgDJMFnA
M83, aka Anthony Gonzalez, new studio album 'Junk' is out now: http://m83.it/buyjunkYo M83 will be touring the world through 2016, see all the dates and buy ...

Tell us what song lifts your mood and why?

The lyrics, the chill vibes, it's uplifting to play in the morning!

Share a story/memory that demonstrates the power of music

I have many... I guess recently, listening to upbeat music when I'm being active helps me feel like I'm at the gym and like everything is a little bit back to normal!

And I love music because it has been my constant in life. In hard times, in times of celebration, in times of letting go and times of redefining who I am.

During iso my partner and I have been converting our house into a dance party on weekends.

^ me in my own lounge room on a Saturday night.

Also, singing all day has been one positive to working from home (sorry neighbors)

To get through iso I've also been making playlists on Spotify with all my fave songs and artists. The artists that have been getting me through are... Frank Ocean, Erykah Badu, Solange, Mac DeMarco, Snoh Aalegra and Hiatus Kaiyote

@Bre-RO  I just discovered them actually! Do you have any of their songs you could recommend to me? And I love the idea of converting your living room into a party space! What does that look like?

My fave M83 songs would be Midnight City and Lower Your Eyelids to Die with the Sun!

How does music help you through tough times?
I often listen to music that describes or reflects how I'm feeling. This can be really cathartic. I also like listening to uplifting music and songs that have a positive message when times get tough.

@Claire-RO  I find listening to sad songs helps me process sad feelings too! I hadn't heard of Circle by George Alice, so I looked it up. I love her voice! I also love the video about her inspirations for the song! Thank you for introducing me to it!

@WheresMySquishy Absolutely agree that it can be cathartic to listen to songs that reflect how you're feeling. As soon as I read your answer I was like this captures it so well for me too!

I also find that music can be a distraction from my thoughts and things going on in my life. Especially when I find something that just captures my entire attention. Like when I found MILCK and her songs. One of her songs Ooh Ooh Child was in a tv show I was watching and I was like "I need to find this song" and I spent so long just completely in awe of her music, and captivated by her passion.

I also love listening to the artists talk about their music, inspirations, and experiences. I find it gives me a new appreciation for their music

I just wanted to send a big thank you for everyone who took part in this discussion! ReachOut's content team actually wrote an awesome article about how music can get you through tough times - and some forum users were quoted! If anyone wants to check it out, have a look here.

@Bre-RO @Bee @WheresMySquishy @Tay100 @recharging_introvert I just found this thread, interesting haha. Sorry if I missed anyone in the tags.

Tell us what song lifts your mood and why?: There's lots really, but "Someday" by Rob Thomas (my hero) is one of them. It's such an inspiring and catchy song. I saw him sing it live in concert for the first time last year too so it had a lot more meaning to me, also "Little Wonders" by him too (he did a slow piano version and it was beautiful).

Share a story/memory that demonstrates the power of music?: Well, this band I like (but don't listen to much because it brings back some bad times for me, although I like the band and their music), The Goo Goo Dolls, introduced me to my best friends over in America, so Internet Friends. I started talking to this one guy who's the same age as me (20, 21 this year) on a fan group, became good friends with him and just clicked instantly and bonded over music. He introduced me to his girlfriend, then his Mum, then his girlfriends' Mum, then his best friend (a guy, who flirts with me actually, I have feelings for him too), one of his sisters (who doesn't use Facebook much) and a work friend of theirs. I'm all so close to them and if it wasn't for that band, I wouldn't have met them. They treat me like family and all of us are always there for each other and have a lot in common about music, or just general things. They mean so much to me and I hope to meet them some day