Sign In
Turn on suggestions
Auto-suggest helps you quickly narrow down your search results by suggesting possible matches as you type.
Showing results for
Search instead for
Did you mean:
Options
delicatedreamer
Star contributor

To dlo lists are a favourite of mine, and setting goals and deadlines for myself (E.g. first draft of x assignment to be completed by next friday).

When I was still at uni, I used to get those wall calenders and write down the due dates, that way there was always a visual reminder. It is so easy to say that it isn't due in a while when you are just looking at your diary. I also used to do count downs in my diaries just so I could get a reality check.
My entire life can be described in one sentence: It didn't go as planned and that's okay. ツ
1 High Five
ruenhonx
Post Mod

How do you stay organized and on top of things?
Normally I don't

lol
I've been using my phone calendar for work, so I might just continue with that, but I found a physical diary helped with TAFE, so I'll do that too!
And I'm just going to plan and take it day by day

I've got an appointment with a job service provider tomorrow, but with what you have told me, I may be able to start studying this semester. Eek!
My entire life can be described in one sentence: It didn't go as planned and that's okay. ツ
2 High Fives
j95
Uber contributor

Two classes into it I'm asking a friend for a pen or I have lost my pencil case so I'm writing in green texta I found on the floor. 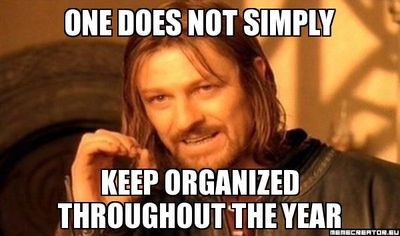 //You can stay afraid, or slit the throat of fear and be brave//
3 High Fives
Leethal
Youth Ambassador


@OrangeOliver well lets just say I'm not the sharpest tool in the shed right, so i find it really hard to ask for help with things, I feel like everybody thinks geez thats easy how dumb is this bloke.

@j95 I know EVERYONE says it, but it's so true - if you ask a question about something or ask for help, chances are someone else wants to know it too and they'll love you for it. I do some tutorial-type stuff with first years and half the time the people who don't get it straight away end up doing better in the long run because they actually try and put effort in.

I once spent an hour or so helping a girl who has to drop out of year 11 or 12 or something to have a kid, and was now starting uni a couple of years later. She didn't understand half of the stuff they had to do for a practical because she just never learned the basics that they assumed everyone learned in high school and was SO lost. After I took a bit of time going back to the start (which, granted, for me was VERY basic stuff I learned in like year 8) she was so much happier because she actually understood. She was so embarrassed at the start when I was asking things and she had to keep saying she didn't know, but it was worth it in the end. She was in one of the classes I led, so it also meant that throughout the semester I chatted to her once in a while to see how she was going and usually offered to help explain things more if she didn't seem to get it straight away.

As much as I personally HAVE always been a total nerd-smartypants-whatever and get stuff super easily, I definitely understand that not everyone's brain works the same way and that I'm just kinda lucky. I also think that just because some people don't understand things easily it doesn't mean they're dumb at all - sometimes they're just not being taught the way that they'll understand it best, or their brain is better at other things. In the scheme of things, it's no big deal.

Also, to add to my mammoth post.. A lot of the time AS someone who is a total nerd, it's even harder to ask questions. I have no idea where I was going with this bit, but it was significant somehow. Might remember later. But eh.

Also also - studying is about YOU learning things - so bugger what people think if you ask a question, ASK AWAY!

..I wonder what I've missed while typing this?

- Write in your diary the important dates and deadlines for assignments

Haha @j95 a can totally relate! I never have a pen