Sign In
Turn on suggestions
Auto-suggest helps you quickly narrow down your search results by suggesting possible matches as you type.
Showing results for
Search instead for
Did you mean:
Options
lanejane
Post Mod

As the end of year hits in Australia for most Year 10, 11 and 12 students the school grounds start to turn into a scene from The Hunger Games. You would think it’s because everyone wants to fight to the death for the top exam scores. But it’s not, there’s something much more important going on: the school formal. 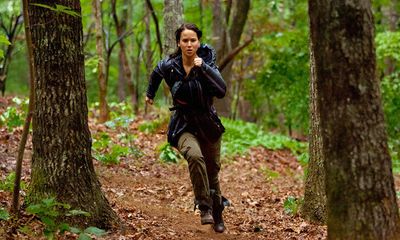 Young people everywhere are on the hunt for a date and a group to share a limo with. Shit hits the fan left, right and center because limos go fast and dates go faster… At the end of the day, you leave school fantasizing about egging the principal’s office just so he will cancel the whole formal due to bad student behavior. In all honesty, the stress of a high school formal is second only in life to marriage, so parents and teachers should never underestimate the amount of drama that comes up because of it.

For some, finding a date is easy.  These are usually like “Victor and Hermoine’s” who magically just wind up in each other’s arms and you want to throw something at them for being so lucky and perfect together. For others, it’s not so easy, and it’s feels a bit more like being “Lola and Brent” from The Loved Ones – you start wondering if kidnapping someone is the only way you’re going to get a date… Then, for some others (like me) it’s a bit of both. I had my Hermione moment because I scored the perfect partner, but then shortly after I was told by my Year 12 coordinator we couldn’t go together because we were both girls, so that’s when I got a bit Lola-esque crazy. 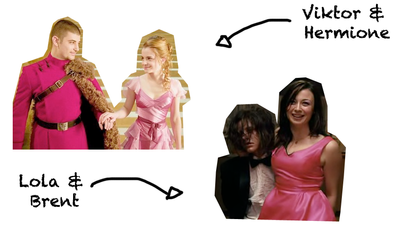 Personally, I felt pretty upset and annoyed about the whole situation. Although, I took comfort in the fact that other people around me were facing similar issues. Girls whose parents wouldn’t let them attend, boys with no dates and a whole bunch of people who were facing expulsion because they had given in to egging part of school property (it was worth a shot). Luckily for me, my parents and friends were pretty supportive and I watched heaps of positive stories of same-sex formal partners on Youtube who empowered me to ignore stupid high school politics. So, I decided to go anyway.

Officially, my partner and I went as “friends”. Unofficially, we were the cutest couple on the dance floor.  I waited for the start of the first song then ran on to the dance floor to share a big pash with my date. I felt like this was pretty good pay back for my Year 12 Coordinator who sounded a lot like Ja’mie (Ja’mie Private School Girl) when he had first spoken to us about not going together. 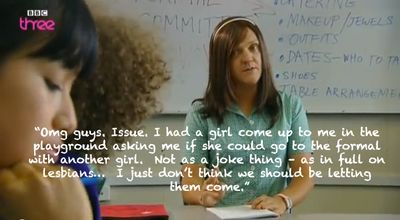 At the end of the day – whether you go with your friends, with a special someone, or by yourself – a formal is all about having fun and leaving Year 10 or 12 with a bang. It’s during these final months of the year that you realize that high school is coming to a close, and that you can start celebrating an exciting new chapter of your journey… So… how do we stop formal drama getting in the way?

Join us on Monday 3rd Nov at 8pm AEST to discuss it and to get some tips on how to overcome formal date drama and make your night one to remember!

Welcome to tonight’s Getting Real session on formal date dramas! As high school comes to a close with a dashing sprint to the finish line, we hustle and bumble along to get things done. But, move out of the way, exams! A more important issue is among us! Time to get ready for the school formal. To many of us, formal brings us our greatest memories of high school and gives us the chance to go out with a bang. We’re looking forward to hearing from you and seeing what your thoughts are on what formal means to you!

Tonight, our chat will be moderated by the wonderful @lanejane , @Billy-RO and myself. We’d like to remind you to take a look at, and abide by the community guidelines too – just so we can keep this safe and awesome as possible. But, if at anytime, you feel that you need to talk, please check out emergency help.

How would you like your how school formal to go and what does it mean to you?

My school formal didn't mean much to me until after it had taken place. On the lead up, I was kind of just annoyed about the whole thing because of my date drama (as in the story above)... but afterward I was like dammmmn that was a good night. And it really made such a difference to the end of year 12.

Also - i'm just gunna put out there that it feels like in america there is a lot more importance put on the "prom" than in australian on formals. Anyone agree?

@lanejane Same here! Formal didn't mean a great deal to me. At 17, I wanted to be that cool hipster to slink away - that non-going formal sleuth. But I ended up going anyway~I was surprised that it wasn't as bad as I thought it would be

It was a lot of fun getting all dressed up!

Well, my high school formal was kinda weird because my date ended up sleeping with a mutual friend of ours. That wasn't fun. Everything before that was pretty great, though. I remember so many of my buddies all being in the same room, cutting loose, and it was a real celebration.

@Myvo Getting dressed up WAS fun. But I was such an under-developed 17 year old that I look like a child who has borrowed his dad's suit. Sigh.

@lanejane Hmm~I dunno. I think that with both 'prom' and 'formal' - it can turn out to be a huge deal to people. There have definitely been students who've gone all out because it's their special night! Reality TV, anyone?

Hey guys, gonna pop in for tonights sesh! (Might be doing it to mega-procrastinate on uni work but sshhhhhhhhhh)

How was your school formal and what did it mean to you?

My school formal was pretty good, but definitiely no where near as much of a big deal as people made it out to be. Bascially all it meant to me was being a fun night to hang out with my friends

@Billy-RO that sounds rough. still seems like you had a pretty good time at the start though. your response is a pretty good example of the drama that comes with formals. we are going to chat about that later tonight too.

@Myvo what made you change your mind?