Sign In
Turn on suggestions
Auto-suggest helps you quickly narrow down your search results by suggesting possible matches as you type.
Showing results for
Search instead for
Did you mean:
Options
Highlighted
florenceforever
Uber contributor

“My favourite thing is to go where I've never been” said Diane Arbus.

You can’t deny it, travelling is probably one of the top things on your bucket list right now, and will probably forever stay there, no matter how much travelling you do! Australia is over 7.5 million square kms and home to over 400 indigenous nations - and of the 14 ecosystems defined worldwide, Australia is home to eight...  Then beyond that the earth boasts over 200 countries, many of which have their own cultures, beliefs, attractions, languages and food (oh my goodness, food!) that many have the strong desire to experience.

Travelling can come in many shapes and forms: travelling with family, friends, your school, university trips, with religious/volunteer groups, going on tours and even just by yourself. You might stay inside within your own state, visit another state or territory in Australia, or even use your passport to enter an entirely different country! You could take a plane, train, bus, boat, car, caravan or any combination of them! 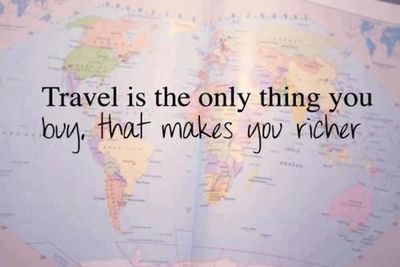 Travelling gives you the opportunity to experience life from a different point of view. It can even change the point of view on the world. I travelled to Melbourne so much that I decided I wanted to live there, and now I am! Right now I have friends travelling in Europe, Asia, South America, Africa and North America. Each has found their own unique travelling styles – who they travel with, where they go, where they stay and how they spend their time and money.

The magic of travelling is that you can make it your own. There is no set one way to travel. You can do what works best for you to have the most rewarding time possible. However, travelling can have its low points, and we’ll be talking a bit about them as well and how we could avoid them in future (anyone else been the victim of pickpocketing in Paris!?)

Personally I have been lucky enough to travel quite a lot. I’ve been to Europe several times, and many different countries in Asia. And yet I still feel like I’ve barely scratched the surface of seeing the world. Travelling excites me and reminds me that the world is virtually limitless.

Join us to discuss the highs and lows of travelling on Monday 22nd June at 8pm AEST. Whether you’re a world class traveller, or haven’t left the state you were born in yet, we want to hear from you!

Hey all! Welcome to another Getting Real session. Tonight @OrangeOliver and I will be talking all about travelling! The highs and low, the benefits and risks – the hilarious stories and the moments where you just wanted to go home. Most of all, we just want to have fun tonight!

Before we get started, please make sure you are familiar with our community guidelines. And if you’re feeling overwhelmed, please check out our emergency help page.

Question 1: If you could travel anywhere in the world tomorrow, without anything holding you back (ie money, work, school, etc) where would you go and why?

hey @Troy! How are you going?

Where in the world do YOU want to go!?

Super excited about the Getting Real session tonight! Not sure there is anything better than travel!

If you could travel anywhere in the world tomorrow, without anything holding you back (ie money, work, school, etc) where would you go and why?

Question 1: If you could travel anywhere in the world tomorrow, without anything holding you back (ie money, work, school, etc) where would you go and why?

Would probably go to London.

Why? Because my brother is studying at cambridge, so I could visit him for one, as well as stay for free and he is allowed to invite guests to all these dining places for food etc and could show me around this awesome place!. Would be an awesome experience!!!

Turkey because I have family from there in Australia and Turkey. I'd love to see my relatives that I haven't seen in ages and also learn the language because my Turkish relatives in Australia speak it sometimes when I see them and I really want to know what they're saying. It's so frustrating!
0 High Fives
Highlighted
florenceforever
Uber contributor

I agree @OrangeOliver - traveling is so much fun!

YAY! Hello guys! (this was perfect timing, just as I'd finished emptying out my 'everything else' photo folder, it was time!) So happy I can make it!

If you could travel anywhere in the world tomorrow, without anything holding you back, where would you go and why?
I've always wanted to go to the Galapagos Islands. I'm a lover of animals and it's just a place I've always wanted to see. (plus the photo opportunities!) especially since it's not much of a touristy place, so it's be mostly untouched. I don't know if it's still like that but I still want to see it before it's ruined by people.
2 High Fives
High Five Lurking Days
Announcements

Check out our Weekly Wellbeing on Drawing Mental Boundaries!

Dr Joe is joining us this month to talk about Emotions. Send your questions through now!