Sign In
Turn on suggestions
Auto-suggest helps you quickly narrow down your search results by suggesting possible matches as you type.
Showing results for
Search instead for
Did you mean:
Options
Highlighted
MB95
Star contributor

I guess we can keep the sloth trend going 😂 I LOVE how everyone else has just jumped on board with it, always cracks me up! You guys are all amazing ❤

Okay so I need some advice.. My psychiatrist wants me to try adding on this new medication but I'm scared to take it and I don't know when I should start if at all. She said it was okay if I decided not to take it if I was too scared, but it might help with my mood. So idk what to do. I'm really busy with assignments at the moment so I don't think it's the best idea to start taking a new medication at the moment. Should I like talk to a gp about this? gah.. I'm just afraid I'll have really bad side effects like I did this one time with a drug they tried me on in hospital.
Reply
0 High Fives
Highlighted
MB95
Star contributor

Ugh yeah, I hate starting new meds cause they always whack me round a bit! And hearing you've had similar experiences I can totally understand why you'd be scared! I'm glad to hear your psychiatrist sounds really supportive and understanding though. That's definately a plus!

What do you think your GP will be able to help with? Sorry.. I don't have a psychiatrist atm (they're still in the 'trying to convince me' stage 🤣) but I thought they were higher than GPs? Like knew more about this stuff? Do you think maybe the GP can help with side effects or something? I'm just a little confused?

I do however, think that maybe starting a new med now when uni is so crazy is not the greatest idea. But that's just my opinion!! Your psychiatrist and GP will know alot more than me! I just know for me my psych and GP always avoid changes around exam time or times that are already stressful. Like I've been pushing to come off my meds for ages now but they want me to get through my exams first and then look at all that. So idk, maybe just voice your concerns with them? Like is there any rush to taking them? I mean sometimes meds work wonders for people and help rather than hinder but I guess that's just the decision only you can make - if this is the right time and if it's something you want? Idk. Sorry, my advice and support game is soooo off right now! 🙃

I guess just telling me when I should start them, Idk. Psychiatrists are higher but this is a private one I've only 'seen' twice. I haven't really said much to her haha. But like a gp should be able to recommend when I start and gps are easier to see and, well, free so yeah. It's just uni is basically busy for the next 6 weeks so like when do I even start taking them haha?

I think it makes sense why you're feeling so uncertain about taking this new medication, especially if you've had bad effects with other medications in the past. I agree with @MB95 that you're the best person to decide whether you think it is worth trying out, and whether it is the right time to do it now, because you know your situation and your moods best.

If you think it would be helpful to get a second opinion from a GP, then that is definitely something worth considering. I think it's also important to remember that with things like these there isn't a set deadline that you have to make a decision by either; it is also perfectly fine to feel like right now there's too much going on for you to try and add something new, and to revisit that decision later on

As much as it sucks not being able to share it with us, it's still really exciting and we can still celebrate!! 🎉🎉🎉

How are you feeling now that it's up? Such a great achievement! It was for the place you go for group hey? (Sorry, goldfish memory over here).

Yeah it was (not goldfish memory!) @MB95! And thanks @TOM-RO

Okay I'm freaking out my assignment is due tomorrow and I'm still in the research phase there's no way I'll get it done so I'll have to use my disability services extension (a week) which makes me feel so crappy like a failure and even then it'll be a stretch to get all my assignments done. Why can't I just start earlier? It's like I have no sense of time. I'm so behind in my lectures. My dark thoughts are getting worse. I'm not sure from assignment overload or because I tried to decrease the dose of my other medication (the one that makes me sleepy and put on weight) mainly because I was drowsy all day and needed to be awake for my assignments. I can't do this it's too much how am I supposed to write 2500 words in the one night. Should I stay up and get it done or should I use my extension? Idk what to do everything is so messed up. I just want to escape if you get my drift but I am safe. I can't do uni I don't know why I'm doing it I can't do anything
Reply
0 High Fives
Highlighted
Lost_Space_Explorer5
Mod

and not only that. I've lost all the stuff I used to do- ice skating, piano and I'd even started roller skating. It's not even covid that's stopping me from going back I'm just useless ugghh
Reply
0 High Fives
Highlighted
MB95
Star contributor

So don't for a second believe that thought!! Okay?! ❤

It sounds as though you are feeling quite overwhelmed with evetything atm though and we both know what a trigger that can be..

I can understand why you're freaking out about your assignment and also why you're feeling like a failure for needing to use your disability extension. But PLEASE don't see it as that. I know it's so much easier said than done, but try and look at it in a less negative way e.g. that you've had a lot going on and have done amazing to get to where you are now with everything and that there is absolutely NOTHING wrong with using the extension!!

I've just had the same sort of thing happen with me and the same sort of feelings but am slowly accepting it and seeing it differently. I had a 50% assignment due and only started looking at it a few days before. It stressed me out, I started hating on myself and not going to good places because I allowed myself to believe I was a useless failure. I felt so guilty and undeserving asking for an extension but fought hard with myself and just asked. I got the extension and it wasn't until my GP made me realise I've had so much more going on than the average person that I let myself just accept it. I realised it wasn't completely my fault I started so late, instead I'd been struggling so much to get everything else done on top of trying to keep myself safe that I could only physically manage to concentrate on one assessment at a time. The fact I was even starting it was an accomplishment in itself.. and now that I have the extra time I feel like I can breathe a little and hand something in I actually want to hand in and not just total garbage.

I don't mean to have gone on a rant there and I promise I'm not trying to make this about me, I just wanted to try share my situation with you to let you know you're not alone and that as hard as it is, there is absolutely nothing wrong with using your extension!! As long as you get it done and handed in - who cares if you need a little extra time?! I say take it and make the most of it!!! Just be kind to yourself okay? You deserve it and the disability services wouldn't support the extension if they didn't feel you required it. ❤

Hey @Lost_Space_Explorer5, a lot of people struggle with completing assignments on time. It doesn't make you a failure, even if it feels like it. I know you have been dealing with a lot lately, so it makes sense to me that you may not have felt excited about completing a 2500 word research assignment. I know this feels like such a big hurdle to jump over.. and I am not saying it is small. But what I am saying is that you have been doing this all throughout your degree. One way or another, you have made it through each assignment. You have also done all of those activities before (piano, ice skating etc.) which is amazing! I know the sad part is that you feel like you've lost those skills now.. but your body has muscle memory and you will be able to pick it up quicker than you think.

Personally, if I were you, I would use the extension. While I am a night owl and could easily stay up all night, it can be stressful and doesn't feel great to write that many words in one night. Plus, you have the disability services extension for a reason. You are allowed the extra time. It might help to set yourself some manageable goals each day so that you can complete your current (or next) assignments within the new time limit. But it is totally up to you because you are unfortunately the one who has to sit there completing them.

I have faith in you though!

Philoslothical sloth as motivation for a good research based assignment 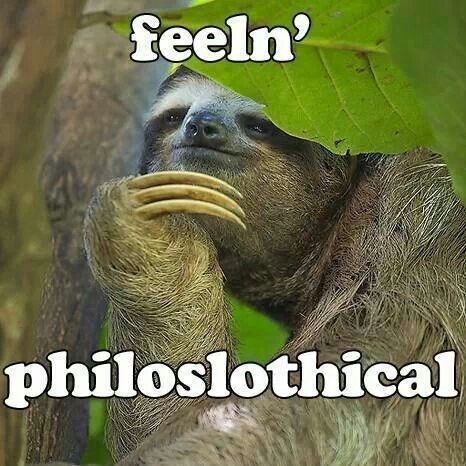