Sign In
Turn on suggestions
Auto-suggest helps you quickly narrow down your search results by suggesting possible matches as you type.
Showing results for
Search instead for
Did you mean:
Options
Highlighted
Eden1717
Uber contributor

@hellofriend  Yeah it would absolutely make things easier for everyone if both sides put in effort to communicate with the other better it is always better when people work together. The processing issues would make things difficult especially if the conversation is fast paced and has a lot of people involved. Is it easier to keep up with the conversation if it is one on one? Sarcasm is a tough one especially in Australia where we use it all the time. What types of humor do you find you click with most?

@Eden1717 yep for sure. And that process would be even better if people are taking into account each sides' needs and capabilities when figuring out how to adapt to each other.

It is a lot easier to keep up one on one. Sometimes I still struggle a bit if it's not a conversation topic I'm very familiar with (I can follow it then but still struggle with figuring out how to contribute). I guess there's just the issue that usually I meet someone in a group setting and that's when they make their first impression of me, which is often that I'm quiet/boring/awkward. So it's hard to get to a point where they want to get to know me in a one on one setting. I've had some good relationships with a couple of people who put judgements aside and were open to getting to know me though.

Sarcasm leaves me confused a bunch. It's not necessarily a key thing that stops me connecting with people I don't think, because in group contexts I'm generally just trying to follow the conversation anyway. One on one usually I'll just express confusion or ask 'sarcasm?' if I've got my suspicions and they'll tell me and I think it usually flows ok (often they find it funny that I was unsure at first, which I don't mind and generally see humour in too). My husband tells me if it's sarcasm pretty much straight up. I've heard of someone who's autistic in a supportive workplace where in meetings someone raises their hand if they're being sarcastic as they say it which sounded like good problem solving.

I think I like quite obvious humour, like something being just really silly and not fitting the situation and subverting expectations. Here's a couple of my favourite memes: 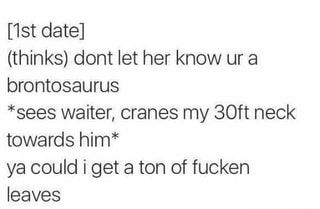 And another one I couldn't find the image for:

Me, nervously: So... I've gotta fight one of these things?

Me: I choose... the Polar bear

Zookeeper: why would you choose that

Or like... Once my husband did something (maybe spilt water on me? Don't remember) that made me respond 'Excuse me, I am not a plant'. He then looked very concerned and said 'oh' in a tone that suggested he was rethinking all of our interactions together with this new information (I found it hilarious).

Sorry for such a long ramble (I'm enjoying the chance for reflection and appreciating the conversation, thanks 🙂 )

Hey @hellofriend, just catching up on what you wrote since I was last on. I am sorry you still experience subtle rejection. It must make loneliness and trying to make new friends very challenging. Thanks for explaining more about the group side of things, that really helped me to learn more about what you value. It would definitely be great to feel as though people DO want you around.. as well as hanging out with people in general.

I like your example of humour with your husband. I definitely find that funny! I hope you are able to find people who are open and put their judgement aside. We all have different needs and capabilities for sure and I find it really disheartening that people can be judged for that

You have a really nice way of wording things.. I don't know how to explain what I mean but it just flows beautifully when I am reading over it. Do you find it easier to chat to new people online?

@hellofriend  Yeah it is important to tailor things to individuals as best as possible. The sarcasm things can be hard I know a lot of people use that a lot when communicating, in my family it is almost constant but even more we all say it with a completely straight face and sometimes even nuretypical people outside our family are confused lol. But it isn’t for everyone, that is interesting about the obvious humor I guess it would be clear and you wouldn’t have to spend extra time processing and hidden meanings. I like different types of humor but I enjoy the terribleness of puns and irony like they themselves are not funny but it is funny that they are that unfunny. I also like fast and witty stuff but it really depends on the day. Is there a situation where you maybe feel more comfortable getting to know people in a group setting like is it easier if there is already a topic of conversation like an activity or a movie to talk about so you don’t have to worry about not knowing what to say so much?

I understand @hellofriend
the sporting groups my sister is apart of I try to help out and make friends that way but it never really goes past a few hellos and goodbyes.
being in a small town I would suspect is quite hard too! I think the website is called meetup but it might be worth having a look and seeing if there are any groups on there that's in your area that you might like. I don't really fit in with groups either, I tend to stick with one or 2 people tbh but makes it tricky cause im not one to walk up and say hello to a big bunch of people
**NEVER be afraid to ask for help because you're WORTH it!**
Reply
0 High Fives
Highlighted
hellofriend
Builder

I let there get too many posts before responding, and now I keep getting overloaded trying to respond to everything, sorry guys. But I did read each of your responses when you posted them and multiple times since and I really appreciated them all @scared01 @Eden1717 @Taylor-RO, thank you ☺️ (I'm probably not up to properly responding to them all though, sorry)

I've been feeling a bit better regarding this lately. I read a post that said 'what advice would you give your younger (autistic) self?'. Mind would probably be 'focus on relationships with the ones who treat you right. If there aren't any of those around, focus on yourself for a time.' I think that helps me now too.

I also did a bit of training with other work people and I think I'm in the early stages of making a friend, huzzah.

Another thought I've had about why I socialise differently is I tend to view every person's voice or input as equally important, whereas I think neurotypicals might have a bit of a hierarchy or more selective focus. It means I often find myself standing in a circle trying to keep up and understand everything each overlapping voices say even as it breaks into separate conversations, whereas I think others are probably focusing on the bits they see as important and tuning the rest out. (Just a theory, I'm trying to isolate what the specific differences are that impact me, but it doesn't matter a great deal)

I think someone asked if there were types of activities socialising is easier... I enjoy it when there's a clear (and fun) activity we're all doing. Unfortunately there's been quite a few times I've thought I was accepted and part of the group because I was there, having fun, doing the thing they all were, and appreciating the people around me... But it's then been a rude shock where it's been revealed that actually I wasnt really seen as welcome our part of things really by the others in the group

Hello @hellofriend, it is really nice to hear that you are in the early stages of making a friend. I hope that your friendship is supportive and lovely ! It sounds like you have had a big think about why you might socialise differently. I think it is reallly awesome how insightful you are of your own thoughts and interactions with others. Hopefully being aware of this will be helpful for you

I am sorry to hear about the negative experiences that you have had before when you were in a group. As you mentioned, socialising in groups can be very hard, especially if you don't the others too well. I hope that you have had more positives instances so that those memories can outweigh some of the worser ones