Sign In
Turn on suggestions
Auto-suggest helps you quickly narrow down your search results by suggesting possible matches as you type.
Showing results for
Search instead for
Did you mean:
Options
SA1971
Rookie

Returned from Travel and going nowhere in life.

Hi all, I find that im unable to express myself verbally so im trying this out..here it goes..

So i am a 23 year old girl who has a huge dream of going to University. Specifically wanting to study zoology and conservation. I graduated from high school in a small town in north east victoria and received a below average enter score of 17.5. Now im not dumb, infact im very intelligent but i failed to apply myself 100% to school because i spent nearly all of my time with my boyfriend to which i was also quite commenly fighting with my parents which made my limited time at my house very negative and unstudyable, therefore i would always be at my boyfriends house, baseclly living there. Because i enjoyed being at he's large family house so much i never studied, it was like the family i never had, it was blissfull.

After i finished school i worked for a year and saved up some money. The year after my boyfriend was accepted into university in melbourne and because i loved him, i followed. We moved into a small apartment in an innercity subburb of melbourne and I got a job as a store manager.

A few months after moving i decided to brake up from him, as i wasnt happy...to this day (nearly 5 years later, my feelings towards him are still very complicated and I would say that im not over him..confusing for readers i know)

During the past 5 years Iv'e lived both by myself and with a few different housmates whilst i was working and paying rent, not saving at all.

As 2014 began i decided i wanted to study to be able to give me a backdoor into uni..i wanted to get my life on track. As i was applying to uni as a mature age student, i was required to take a STAT test..to test your IQ pretty much. I tried and thought i did a prety good job, being the last person to finish the test i was confident that i had done all i could. I also enrolled to do a certificate 4 in Animal Science at TAFE but then as i had a disagreement with a teacher, i then failed to complete it. I then found the results of my STAT and realised i also received an 'under average' score..WHAT WAS WRONG WITH ME? Maybe i really am dumb all along.

Being fed up with the world, financilly, romantically and educationally, a position came up for me to travel to South Africa to be a volunteer leader, helping both local and international individuals coming together as a group to volunteer at wildlife sanctury's. I did this from January 2015 and have only just returned a week ago, alltogether being 9 months.

Now im back in my hometown, to find out my ex now has a girlfriend whos 5 years younger than him and whos studying to become a doctor. He's in his last year of uni and im sure they are making wonderfull plans together.

He always used to say "If you go back to our hometown, you will go backwards in life"

And i can't help but think, 'here i am. with no money, no job and still no qualifycations. In a town where everything reminds me of him' Im in alot of debt to my parents because living in melbourne screwed me up financially. Im trying to find a job, but cant stop missing everything in South Africa and cant stop thinking how fast my life turned to crap since arriving back. Nobody shares the same views with me here, theres nothing i can escape to animal wise.

I feel comptley lost. All i want to do is go to uni but now im financially stuck paying my parents back in a small town i hate with no growing possibilities.

I just want to start by saying that just because you didn't do so well in the STAT test, doesn't mean you're "dumb" at all! Some people don't perform as well in written exams and if you do decide to take another STAT test, see if there's some kind of studying you're able to do for it beforehand so you feel even more prepared.

It was really cool to read that you want to be a zoologist and that you spent time in South Africa doing volunteer work in the animal sanctuary! Is there anything in your hometown or nearby where you could do any kind of volunteer work with animals? Even maybe the local vet? You never know, you might able to find a job doing something similar.

I'm sorry to hear that you had a bad experience with that TAFE teacher. Would you consider giving TAFE another try with a different teacher? Studying Animal Science at TAFE sounds like it's right on the path to achieving some of your long term goals, so it might be worth considering giving it another shot.

Break-ups are always hard, and even after being apart from someone for a long period of time, it can still feel really weird - and even hurt a bit - when you hear they're with someone else. But try to remember the awesome things you've also done and experienced in the last few years and be proud of your accomplishments! Going to another country to live and volunteer like you did is a really awesome thing that a lot of people wouldn't be able to do!

Just because you're back in your home town doesn't mean you've gone backwards at all! Sometimes going home, especially after being overseas, can be a good way to reconnect with family and plan what you want to do/where you want to go next.

Im not sure if I can help you but I can only speak from my own experience.
First I think true love is freeing. If you believe your ex is happier without you then you should want him to be happy. I met my ex only a few days ago after not seeing each other for over 2 years. We spoke a bit and though it stings a bit when she mentioned that they are getting married in November and that she is truly happy. Well, Im happy for her.

Second, we tend to want things that we cant or dont have. Maybe you are at this stage wanting to be in a relationship but you know what? I know there will be so many people myself included that is so jealous of what you have done in SA. Im sure maybe even your ex n his partner is probably very jealous of you. Im not saying making ppl jealous is a good thing, its just that I think you had a great experience and you did a wonderful thing. Which leads me to my last points...

Life is full of different pathways... you chose to be free and help others. You could have stayed with him but you couldnt. There is no right or wrong there is just the decisions we have made. And lastly, relationships imo are all about timing. Your time with your ex just didnt match.

You will find love again. You took a short break and now you are home. Its normal to not know where you are. But you will figure it out soon. I promise.

Some great comments by @moonwalk and @standinside. I wanted to reply to your story by saying you've come a fair way!!

Be proud of yourself. Life has so many twists and turns, and you're on top of it by considering all the options you have, and seeing that life is actually full of opportuinities!

When you find yourself at a time where you have several options, I can tell you that what I found helpful was to take some time to do some journalling and take a large paper and make a diagram or mind map with your options and where they will lead.

Find out what you really want to do, what makes you happy, where you want to be, where you see yourself in five, ten years.

I'm interested to hear what your think about these suggestions and previous replies.

Just a quirky sidepoint , if I may mention it, @SA1971 ...after reading your post title - "Returned from Travel and Going Nowhere in Life"...

You were gone quite a while; you've done some good things over there and met new people; you've grown you've had a good time - you expected life and relationships back home would change and they had. You've changed too!

As @moonwalk so adeptly mentioned, and I'd have to agree wtih him, is that -

"ust because you're back in your home town doesn't mean you've gone backwards at all! Sometimes going home, especially after being overseas, can be a good way to reconnect with family and plan what you want to do/where you want to go next. ...

I hope you keep following your passion"

I even find that when I have been overseas, or even just on a trip away in Oz for a break - it extends you, grows you, refreshes you. But hey, I'm sounding like a fuddy duddy now , but it's true! You've got that vibe that you experienced that. And be confident about your intelligenc and academic skills - All things are possible! You make your dreams come alive.

Here, I just had fun making up a meme for you. Years ago I used to be big into making videos and such, and I'd send them to a friend of mine, and we'd have fun with it. That was good times

He also used to make some awesome videos - even if it was using another program or online editing facility.

Anyway, I hope you get a giggle out of it! He's cool huh? 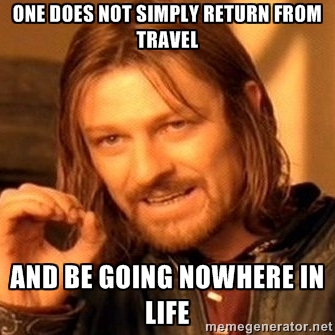 Check out what events we have planned for March!

We recently had an AMAA chat with Psychologist Rashida all about change, check it out here!