Sign In
Turn on suggestions
Auto-suggest helps you quickly narrow down your search results by suggesting possible matches as you type.
Showing results for
Search instead for
Did you mean:
Options
Highlighted
TOM-RO
Mod Squad

I'm glad to read that you've been feeling a bit better since the weekend.  I know it's difficult to avoid the news as the online world is 24/7.  Back in the day one was only exposed to it once or twice a day.  Limiting this exposure seems like a good place to start for you, as difficult as this may be.

I'm happy to read about your passions too.  I can really tell that you're passionate about gaming, arts, the Greens, environmental issues etc.  Having these interests are great.  It's also great to read that you're determined to overcome your fears, what is a great platform to build from

Sometimes when I get anxious about tasks (e.g., uni assignments, bills, house stuff) I start with the task that brings the least anxiety (e.g., pay me bill), then the next task etc.  That helps build my confidence to eventually take on the tougher tasks.  Perhaps you could try something like that?

Please continue to reach out!

Thanks for the suggestions. Lately I’ve been trying to take time out most days to do some drawing to build my art portfolio, because I’d like to be able to sell art prints at a small event by next year, and also get more exercise by using my trampoline and walking our dogs. I’ve also been wanting to write my own fictional story; I’ve dabbled in it before over the years, but now I want to take writing seriously. I’ve got an idea for the story and characters and themes; the story will have heavy psychological themes and be about overcoming trauma and standing up for yourself and what you believe in. However I’m having a hard time with it because coming up with a coherent plot is difficult, not to mention the actual writing process. I’m having a hard time just beginning it. And I want to write this story as a means of self-expression in the hopes of helping myself.
2019 has been a really traumatic year for me. I’ve tried to stay positive all these years, but all the negative reinforcement from people saying how there’s no hope for us has just kept on beating me down. That’s what I hate about the society here in Melbourne, it just feels like there’s this really unhealthy negative mentality people have that makes it feel like a really toxic place, and I feel like I just don’t fit in.
On a bit of a more positive note once again, have you heard of Adrian Eagle? I’ve listened to some of his music and even seen him preform live at a free concert, and his music has very uplifting and hopeful themes that I can appreciate. Check of this article about him: https://www.google.com.au/amp/s/amp.theguardian.com/music/2019/sep/26/adrian-eagle-on-surviving-self... It discusses his struggles with anxiety and negative reinforcement that caused him to shut himself off from people until he started to upload his music to the world.
Reply
0 High Fives
Highlighted
Maddy-RO
Mod Squad

Thanks for sharing that story.  I read it and really enjoyed it. I really liked the following line:

"I feel like the longer I get to live, the more I’ll be able to know myself.”

Beautiful story. It's always lovely to hear about people who have recovered (or have learnt to manage) their mental health struggles. Stories like this really do spread hope, so thank you.

An art portfolio sounds awesome. I'd love it if you shared some work - so long as it doesn't jeopardize your anonymity in any way. Writing a book is also an awesome idea. Self-expression is great for the mind and soul

You said "...but all the negative reinforcement from people saying how there’s no hope for us has just kept on beating me down.. That’s what I hate about the society here in Melbourne, it just feels like there’s this really unhealthy negative mentality people have that makes it feel like a really toxic place, and I feel like I just don’t fit in."

Could you please clarify what you mean? Do you think that other states or countries are less hateful or toxic? Are there people in particular who are telling you there's no hope? Is it like your circle of friends? Sorry, I'm just trying to understand what you're going through

I’m sorry, I should’ve probably communicated that I don’t think Melbourne is a completely toxic place. Because that’s definitely not true, there’s also a lot of positivity there too. I don’t mean to generalize an entire group as being all positive or negative. I just meant that sometimes, I feel that it can be quite a stressful and overwhelming place to be at times. I think my problem is that when I’m in the city or other overwhelming places by myself, I feel vulnerable, like I’m worried that at any moment something could happen to upset me and I won’t be able to cope with it by myself. However, I bought some “coping companion” cards being sold by an organization called Checkpoint at another convention I went to just yesterday, this one being PAX.

This was my 3rd year in a row going to PAX and I had a really good time. Seeing all the independent games people in Australia (especially within Victoria) were showcasing got me excited, and I want to support the local games industry as much as I can and hopefully one day be a part of it, because I still haven’t given up on that dream. PAX also had a lot of stuff on mental health support; I went to a panel on mental health issues and the benefits video games can have, where they said games can be great for escapism and helping people unwind if it’s a game they enjoy. I like sticking to games that I find fun and relaxing to play, like Pokémon, Super Smash Bros. and Stardew Valley. They touched on a lot in that panel, I can go more into it if you want. I also saw a panel on writing narrative for games, which I found helpful; one thing that stuck in particular was that they said to just allow yourself to write something that’s not great because you can always go back and fix it. The last panel I saw was more of a funny one, it was watching girls play the KFC visual novel and it was really funny.

There is also a game design class I wanted to get into that was advertised in PAX, it is for people with asperger syndrome and is apparently more of a social and safe environment. I’d really like to go there because it might be what I need. Have I mentioned I am on the autism spectrum? Because I feel I should clear it up because it would explain a lot about me.

And for what I mean by people saying there’s no hope... well, it’s no one person in particular, it’s just the vibe I get from negative people. I don’t know what more I can say about it; people just love to spread bad news and complain about how everything’s getting worse but not doing anything to help. And it’s gotten to the point where I find myself believing them, because from my observation this year has just been an endless barrage of bad news in the media. Last year it seemed like there was at least some good environmental news that helped give me hope, but now it looks like all that good news ended up being for nothing because it’s been negated by all the horrible things that have happened this year. I don’t know if I can look forward to the future after such a devastating year; I just don’t see how things can ever get better now. And I really want to be able to look forward to prospects for me next year, like working, studying and saving up to go to Japan one day. Hope is an extremely important thing to have; and if you lose that for good, it’s all over...

Thanks for telling us more about how you feel. I get what you mean by there being a general lack of hope. I think that is also amplified when living in a busy city - everyone is in a rush and has seemingly forgotten to stop a smell the roses.

I agree with you 1000% - hope is an extremely important thing to have. It's worth mentioning that it's quite normal that in the span of our life we might go through a period of hopelessness. When I have been through these times I've tried taking the control back and giving myself reasons to have hope. Some of my "hope building" tips are:

Know that we are here to listen to you and support you through the hard times you're going through.

Hello again. In the past month since I was last on here I had been doing a little better because I had been following an e-mail newsletter and it had some positive news that helped make me feel better. So for a while I was doing okay, but last night someone on social media I used to be a big fan of posted something really upsetting and hopeless that really upset me and now I feel like it’s undone all the positive things. I won’t name who it is for the sake of anonymity, but they reposted really bad news and were going on about our government is corrupt and that they’re ashamed to be Australian. I try so hard to rise above negativity, but when I see people confirm my reasons to be in an endless cycle of misery, I feel like such an idiot.

It's great to hear that you've been doing a little better - following the online newsletter was a really positive step for you to make. It's so important to find reasons to be hopeful, never stop doing that.

It must have been really hard for you to see someone you're a big fan of speak that way about our government. I can see how that negativity could start to impact the positivity that you were working on.

Is there something you can do today to take your mind off this stuff? Sometimes something simple like having a nice day or catching up with a good friend can disrupt that cycle of misery in it's tracks.

We're thinking about you and are here to listen to you

Thank you. I don’t know if I can enjoy that person’s work anymore knowing that they’ve become such a negative person. It’s such a shame because in the past they seemed like a positive and inspirational person, but it seems like the government has turned them increasingly angry, bitter and cynical. The thought of positive people becoming negative is really upsetting, as is seeing people be so mean and hateful towards each other. 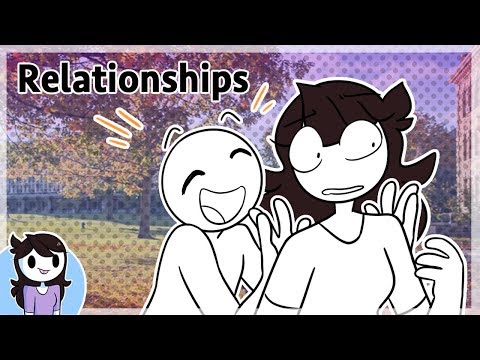 Things about Relationships I wish someone told me about
youtu.be/4H9jTQKmR3Q
people are weird sometimes Check out Kati: https://www.youtube.com/user/KatiMorton ♥ The Team ♥ Denny: https://www.instagram.com/90percentknuckles/ MorganToa...

Also I don’t know if I’ve shared this already or not, but here’s a video by Jaiden on relationships that I found really helpful, maybe check it out?