@SomeoneNADJS I am so proud of you for sending that email!!! Exploring your gender identity can be a mixed bag of emotions and one hell of a ride that doesn't always end once you've decided

Society can be a pain in the butt with its expectations, but it's awesome that things are moving forward for you all!

Do you have any hairstyles you want to try when your hair is longer?
Reply
3 High Fives
Highlighted
SomeoneNADJS
Star contributor

[R] @Tiny_leaf Hi! I was talking with that same person from before who T was talking to when she switched a few days ago, and apparently that’s just the body’s consciousness that I’m used to associating with me, and this is normal. So, basically, as long as I’m not thinking, I’m inactive I guess? If that’s all it is, it’s not so bad actually.

I’m not sure if we can, so I’ll have to check the school uniform policy on boy’s hair. Although, the only rule I know of is that our hair can’t touch our shirt collar. Our solution is this hair product called Tame Frizz and we just tuck that underneath the rest of our hair and then you can’t see it. And it also makes it look like we don’t have a bird’s nest on top of our head. We’ll have to take a look at some of those hairstyles.

[R] Thanks @N1ghtW1ng! Yeah, I get what you mean. S has been going something similar recently and now ze is identifying as agender.

Thank you! Hopefully society won’t make things too bad for us. I don’t know at the moment, so someone’ll have to some research.

Some stuff happened yesterday. I chatted with S in the morning, and ze told me ze didn’t feel like ze wanted to exist. S has always trusted me, and I was able to calm ze down, but ze was also really scared about my mental health (considering things such as what happened last Thursday). Ze also thinks I’m better than ze is (whereas I’m usually the opposite), which I assured hir that it wasn’t true.

Yesterday night, chatted with our KHL counsellor, and I just linked him to this thread so he could catch up on everything that happened in the last 8 days before our chat. That’s probably what I’m going to keep doing, since a lot’s been going on recently.

Other than that, J and I switched last night a few times while talking to the one who Torea has talked to earlier when she switched with me, but I wouldn’t stay quiet because I kept giggling at everything. She was happy I was having fun at least. We had a few questions about switching which they were able to answer, and the rest was mostly just chit-chat.

Bit of body dysphoria yesterday too, but I felt better after talking on KHL and letting J have some time in our body. I was thinking of coming out to Genevieve today via phone call while I was talking to our counsellor, but our mum and I have made an agreement that we’ll meet them in person and explain it together.

Good on you all for reaching out to Kids Helpline

I'm also hearing the S is really struggling at the moment, and you have been doing everything you can to listen and support S. We are always here to chat if any of you are going through a tough time

Is S safe at the moment?

How did you find the experience of sending the thread to Kids Helpline? Was this something that helped the Kids Helpline counsellor understand a bit more about you all? I think that is a really incredible idea!

@Jess1-RO just so you know, I think the ze is S, whose pronouns are ze hir.

[R] Thanks @Jess1-RO. S has been struggling a little bit, and ze has expressed not wanting to switch because of body dysphoria (which is fine with us). S is safe. I'm going to check in with hir a little bit later after I've got some more study done.

Our counsellor found it really helpful (and it also saved a bit of time so I wouldn't have to type everything out again).

Yesterday I went on twice (although these weren't scheduled appointments) because yesterday morning I got scared over whether or not switching was dangerous (although according to a few other systems, as long as we trust each other, it should be safe), and later in the day I got suicidal so I went on a second time.

Part of why I got suicidal again was from worrying about how to keep living in secret about living with another five people in the same body, partly dysphoria, and partly because of something our dad asked me the other day. Whenever he's seen me in a bad state, his advice has always been to tell me to stop being suicidal or stop feeling dysphoric (as if it was something I could control), but the other day we were on a walk together and he asked me why suicidal people were "so weak".

Since our mum found out she made him apologise to me twice. The first time she was also there, but our dad didn't really seem to take it seriously and laughed about it. The second time our mum wasn't in the room, and he came over to me to apologise again. I got a little bit upset with him because instead of asking if I was okay, he instead asked if I was cold, and he said he hadn't read any of the notes or emails I'd written about what was going on. He left and said he was going to read them, but neither him or I have brought it up since.

There are also two other things I wanted to note here. One was the pronouns we use. S uses ze/hir, D uses he/him, and everyone else uses she/her (that includes me, A, J and T). The second one was the "Yeah" that keeps appearing in the subject line. For some reason my iPhone does some weird things when I try to type.

Thank you @Tiny_leaf and @Jess1-RO for the amendments to your post.

That conversation with your dad sounds like it was horrible..

You've already survived more than he can apparently even understand. 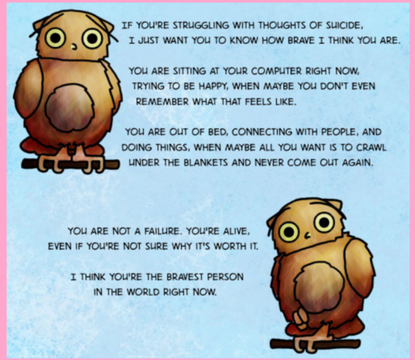 You don't owe him the emotional labor of constantly explaining this stuff to him, or of dealing with the fall-out from these conversations, and you deserve so much better..

Is there any way you could avoid these conversations with your dad, or avoiding spending time alone with him?

Like even telling him that you won't have these conversations with him until he's put in more effort into better understanding what it's actually like to be suicidal (there are heaps of online resources that he can look up, including many for parents), the issues that you've already written down for him, and/ or how to have respectful conversations around suicide.

Thanks for the list of pronouns, they're always helpful.

Mine are they/ them by the way.

[R] @Tiny_leaf Thank you for sharing that message.

We haven’t talked about what happened again today. Normally we’ll walk down to the shops together and he’ll usually find something boring to talk about or something he shouldn’t be saying (I was the one who taught him not to make fun of people’s religions in public). Today I avoided it, and besides, I had study to do at the time. I don’t know if I’ll keep on avoiding it. Now that we’ve learned to switch I guess J could take over, since for ages she’s wanted to talk with our dad, but she still never has. The two have some similar interests I think, so that might work better.

Hopefully one of us can find something to give to him, but he still thinks that emotions can be controlled. He was talking to himself while watching a YouTube TED talk (yeah, he does that) which expressed similar opinions while I sat around programming one of my games. I’m not sure how I’m going to change his mind. Many times I’ve gotten upset with him in the past (i.e. in tears or angry), usually over something he’s said, and almost every time he’s told me to just control my emotions or just laughed at me.

Thanks, good to know

Little update: just checked in on S and ze seems to be doing a bit better. Ze just said ze doesn’t feel like not existing anymore and just wants to spend a bit more time with the rest of us internally. One of the benefits of being in a system for us is having close relationships with each other. Hopefully we can help cheer hir up a bit more before the school term starts again on Monday and the stress starts going up again.

@SomeoneNADJS hmm... TED Talks cover a lot of opinions, including some that are a lot less.. ableist about mental health. Maybe you could 'sneak' some into his recommended videos by playing a few? Youtube has some creepily effective algorithms that you can use.

Also ooooh you do programming? That sounds so cool, my brain's too chaotic to be good with programming

I'm glad S is feeling a bit better. It sounds like you're doing really well supporting hir through this.

Oof, school isn't fun when it's mixed with mental health issues.. I wish you all luck in dealing with it... do you have any self care plans to help you cope?