Sign In
Turn on suggestions
Auto-suggest helps you quickly narrow down your search results by suggesting possible matches as you type.
Showing results for
Search instead for
Did you mean:
Options
Highlighted
scared01
Builder

a paper clip chain @N1ghtW1ng umm im not sure what that is can you uplaod a pic and ill ahve a look?

**NEVER be afraid to ask for help because you're WORTH it!**
Reply
0 High Fives
Highlighted
Nat8
Star contributor

@N1ghtW1ng yeah, what would you like to know
Reply
0 High Fives
Highlighted
N1ghtW1ng
Mod 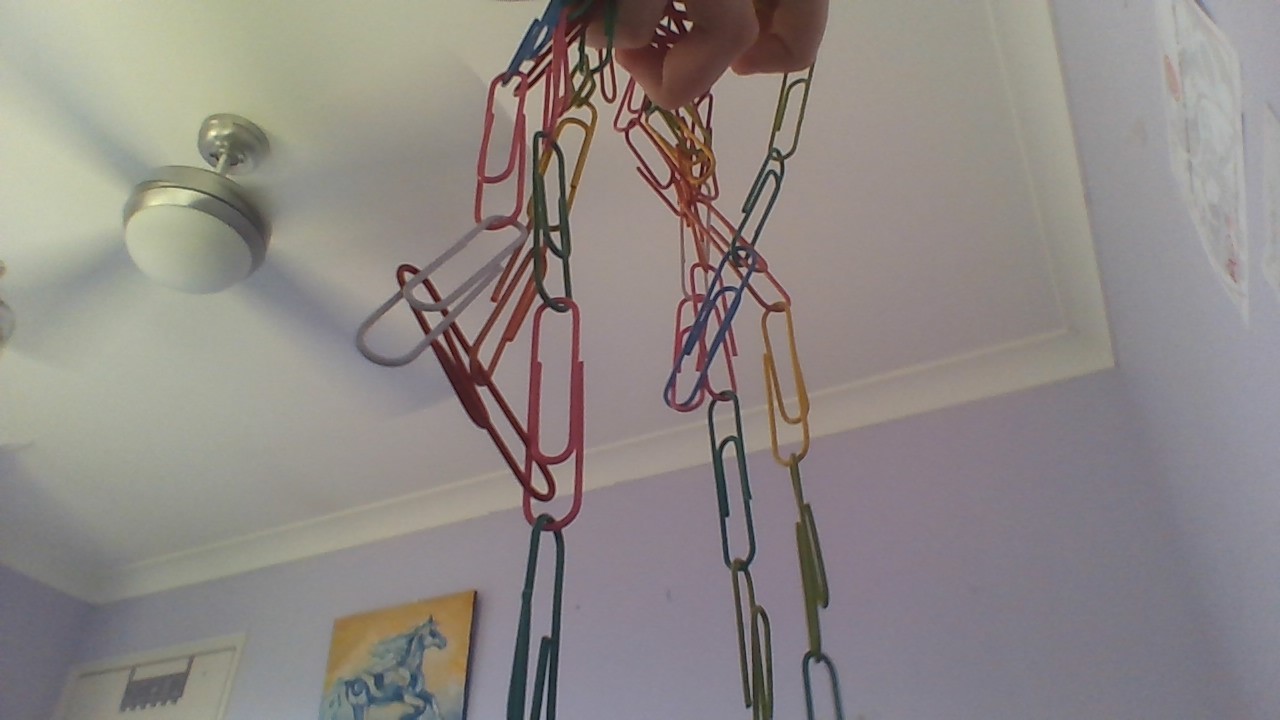 @scared01 that. (just ignore my room, I had to lift my camera up to the roof so you can't see the state of my floor

Literally a chain made out of paper clips

You can't really see it but I made a rainbow pattern (or at least, tried to, I kept running out of colours. Only two blue paper clips

@Nat8 I'm just trying to procrastinate my assignment. I had a bunch of paper clips on my desk so I made them into a chain. In a couple of hours I'm going out to the movies, tomorrow I'm working half the day and then uni monday (which is when the stupid thing is due) *sighs* why do I do this to myself?

**NEVER be afraid to ask for help because you're WORTH it!**
Reply
0 High Fives
Highlighted
Nat8
Star contributor

@N1ghtW1ing I feel ya. I wait till the last day just to start otherwise it never gets done.

The only thing is the last day till it's due is a Monday, where I spend most of the day uni @Nat8 so I really need to do it over the weekend so I can actually finish it all before it's due (which is at 10pm, which is better than 5 but still not as good as 11:59)

@scared01 it's some critical essay (with a choice format, so I have no concrete idea) about socio-cultural stuff. I REALLY wanted to talk about gender, because I have shitloads of knowledge about that (or about how I hate that, but I can easily write 2000 words about gender and education) but NO. It's not on the pathetic list (which only has five things on it) so instead I have to choose SES (status) and inequality, race diversity, religious diversity, aboriginal and torres straight islander and education and city/country divide.
Not many choices, all of them aren't good for me because I just don't have good knowledge about it. And to be totally honest, I'm not interested in any of the other topics, mainly because I had my heart set on talking about gender (which was one of the topics for another assignment, but apparently not for this one which is SO NOT FAIR!) I even asked my tutor about it and when I emailed him if I was on the right track he goes around and says I have to choose a topic from the list. Stupid national units having to work with all stupid states.

I chose SES and inequality because that's probably the easiest one for me. I hope

In other news, as soon as I've written a decent amount (already 100 words in) I'm going to do a page in my giant activity book. Should I do Star Wars, Batman V Superman, Avengers: Civil War or Guardians of the Galaxy 2?
Reply
0 High Fives
Highlighted
Nat8
Star contributor

@N1ghtW1ng that's fair enough. what about twisting the list and talking about gender inequality and how it effects society?

And I chose Batman

Mainly because it was the closest one. I'm now doing some colouring in. You know how they have the image in a grid and then it gives you a larger grid? I have to colour some bits in blue, and then the other in red. I've done eight squares

coudnt you focus your assignment on gener inequlity and education?

**NEVER be afraid to ask for help because you're WORTH it!**
Reply
0 High Fives
High Five Lurking Days
Announcements